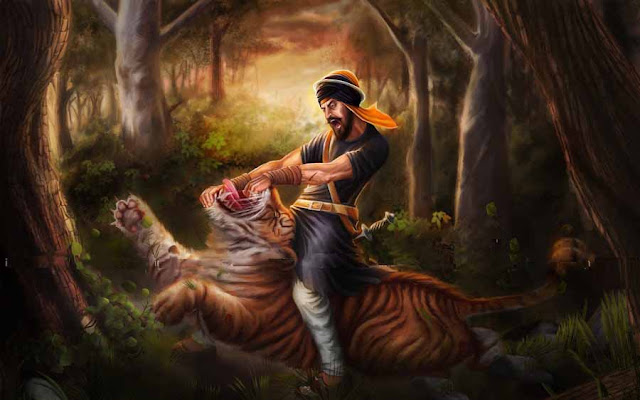 In 1804, Hari Singh participated in a recruitment test for service in the Sikh army and so impressed Maharaja Ranjit Singh with his skill at various drills that he was given an appointment as a personal attendant. Not long after, in 1805, he received the commission with a command of 800 horses and foot and was given the title of 'Sardar' (Chief).
A historical text tells us that his rapid promotion from a personal attendant of the Maharaja to a command of 800 horsemen was owed to an incident in which he had cloven with sword the head of a tiger which had seized him. From that day he came to be known as "Baaghmaar" (meaning - the tiger killer), and earned the title of "Nalwa" (one with claws, like that of a tiger). Another historical text describes his incident with the tiger differently, telling us that he was already a Sardar when the word "Nalwa" was added to his name after he, "had killed a tiger single-handed on horseback, with the sacrifice, however, of his horse." (Prinsep, 1834: 99)
Hari Singh went on to participate in many glorious victories of the Sikhs before becoming the Commander-in-Chief of the army along the North Western Frontier of the Sikh Kingdom. He was appointed Governor of various provinces and was one of the wealthiest jagirdars of the Kingdom.
Email ThisBlogThis!Share to TwitterShare to FacebookShare to Pinterest