Sri Harmandir Sahib, also known as Sri Darbar Sahib or Golden Temple, (on account of its scenic beauty and golden coating for English speaking world), is named after Hari(God) the temple of God. The Sikhs all over the world, visit Amritsar and pay obeisance at Sri Harmandir Sahib in their Ardas.

Guru Arjan Sahib, the Fifth Guru, conceived the idea of creating a central place of worship for the Sikhs and he himself designed the architecture of Sri Harmandir Sahib. Earlier the planning to excavate the holy tank (Amritsar or Amrit Sarovar ) was chalked out by Guru Amardas Sahib, the Third Guru, but it was executed by Guru Ramdas Sahib under the supervision of Baba Budha ji. The land for the site was acquired by the earlier Guru Sahibs on payment or free of cost from the Zamindars (landlords) of native villages. The plan to establish a town settlement was also made. Therefore, the construction work on the Sarovar(the tank) and the town started simultaneously in 1570.

Anandpur Sahib, the holy city of Bliss, as the name translates, is the second most importaqnt centre of Sikh religion. Its foundation was laid by the ninth Guru,Teg Bahadur Sahib, in 1664 AD. From here eleven years later, he left for Delhi to the court of Mughal emperor Aurangzeb to plead for greater religious tolerance and an end to religious persecution. Here his severed head was brought to his son and family. It was here the Khalsa, or the Pure, was born under the leadership of the tenth Guru, Gobind Singh Sahab, on 30 March, 1699. The important places of interest are: Gurudwara Sri Sis Ganj built over the site where the severed head of Guru Teg Bhadur Sahib was cremated; Gurudwara Sri Kesgarh Sahib standing at the place where the five brave followers of Guru Gobind Singh offered their heads and the Khalsa Panth was born (it is also one of the five seats of religious authority), Gurudwara Damdama Sahib marking the site where Gobind Singh was proclaimed the tenth Guru; various forts and fortresses; and the museum housed in the Gurudwara Keshgarh Sahib displaying some of the weapons and arms associated with Guru Gobind Singh and others. 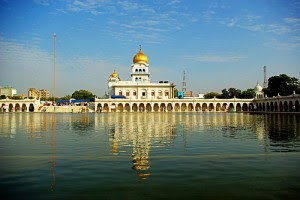 Gurdwara, one of the most popular shrines of the Sikhs in India, is situated in capital city of Delhi. The site of the Gurudwara once housed a large and splendid bungalow of Raja Jai Singh of Jaipur. The eighth Guru of the Sikhs, Guru Sri Harkishan, stayed in the bungalow for a few months, as a guest of Raja Jai Singh. From that time onwards, the place became a revered pilgrimage amongst both Sikhs as well as Hindus. The elder brother of Guru Sri Harkishan, Baba Ram Rai, got agitated when he got the news that Harkishan had been appointed as the spiritual head of the Sikhs.

After making futile attempts to influence leading Sikhs of Delhi and Punjab, he approached Emperor Aurangzeb. The emperor summoned Guru Harkishan to verify whether he was indeed superior and more spiritual than Ram Rai. During that time, both Raja Jai Singh and his son Raja Ram Singh were in Delhi. The Sikhs approached them and they agreed to lend them all help they could. Raja Jai Singh persuaded Guru Sri Harkishan to come to Delhi and at the same time, convinced Aurangzeb to let Harkishan stay as Jai Singh's guest till his supremacy was established.

Guru Sri Harkishan stayed in the bungalow of Jai Singh and during his stay; he continued to serve the humble, the sick and the destitute. Soon, the talk of his healing powers spread. Impressed, Aurangzeb recognized him as the eighth Guru of the Sikhs. Raja Jai Singh later got a small tank constructed over the well in the bungalow. The water of the tank (Sarovar) is believed to have miraculous healing powers and most of the people coming to the Gurdwara make sure to take a dip in the holy water.

People also carry the water (called amrit) to their home, in order to cure their ailments. The main hall of the Gurdwara is quite large and has a small golden dome, which is adorned with a sculpted bronze cupola. The eastern side of the Gurudwara comprises of the community kitchen hall, which is known as the "Langar". Everyday, free food is provided to all the devotees that come to the Gurdwara. Bangla Sahib Gurdwara of New Delhi also runs a higher secondary school, Khalsa Girls School, in an adjacent building.

There is a hospital in the basement of the complex, which is run by Delhi Sikh Gurudwara Management Committee. The basement also houses an Art Gallery, with a rich collection of paintings depicting historical events connected with Sikh history. Last but not the least, Bangla Sahib Gurudwara also has a library, inside its complex. The birth anniversary of Guru Sri Harkishan Sahib is celebrated every year at the Gudwara. You may visit Gurdwara Bangla Sahib of Delhi at any time of the day and you will hear the soothing Gurbani (devotional music) echoing through the surroundings. 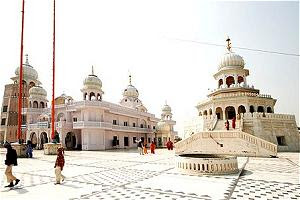 Damdama means the breathing or resting place. Damdama Sahib is one of the Five Takhts of the Sikhs. (The other four Takhts are Akal Takht, Amritsar, Takht Keshgarh Sahib, Anandpur, Takht Hazur Sahib, Nanded (Maharashtra) and Takht Harmandir Sahib Patna (Bihar). It is located at village Talwandi Sabo, 28 km southeast of Bathinda. It is also known as Talwandi Sabo and Guru Ki Kashi. Guru Gobind Singh stayed here after fighting battles against Mughal atrocities. Before his arrival at Talwandi, two of the Guru’s sons were bricked alive at Sarhind and two laid down their lives at Chamkaur Sahib. After writing Zafarnama, Guru Gobind Singh fought a successful battle at Muktsar and then moved towards Talwandi Sabo Ki.


While at Talwandi, Sikhs started coming to the Guru from all over Punjab and other places. Here a Gurudwara was erected in Guru's memory. This place is also known as Guru -Ki -Kanshi as it was made a center of the Sikh learning.

Damdame Wali Bir of Sri Guru Granth Sahib was prepared here by Guru Gobind Singh. It was transcribed by Bhai Mani Singh. The hymns of Guru Tegh Bahadur Sahib were added into the Bir.

It was at Dam Dama Sahib that Bhai Dalla was tested for his bravery by Guru Gobind Singh and brought into the order of Khalsa. It was from Damdama Sahib that the Guru moved towards south. In the meantime, Aurangzeb died and the Guru helped Bahadur Shah, Aurangzeb's eldest son to sit on the throne.

The Guru was honored by Bahadur Shah at Agra. The new Emperor also left for south but parted from the Guru at Nanded. It is said that Bahadur Shah did not fulfill his promise to punish the officials who had committed atrocities upon the Sikhs and killed Guru's young children. The Guru commissioned Banda Bahadur to Go to Punjab and punish the guilty and bring peace to the state.

Guru Gobind Singh arrived here on 20-21 January, 1706 and camped outside the village. The magnificent Gurudwara Sri Damdama Sahib marks the place of his stav. Here local Chaudhari Bhai Dalla looked after Guruji with great devotion. He refused to arrest the Guru as directed by Wazir Khan, Nawab of Sirhind.

Here Bhai Mani Singh prepared the holy volume under the guidance of Guruji. Talwandi thus became a seat of learning and assumed the status of Guru Ki Kashi. It was here that Chaudhari Tiloka and Rama, ancestors of the Pulkian (Patiala, Nabha and Jind) rulers received Amni from the blessed hands of the Guru. Sacred articles of the tenth Guru, namely Sri Sahib (Sword), a mirror, a match lock, a portrait of the tenth Guru, a pothi. (book) transcribed by Baba Deep Singh, Sword of Baba Deep Singh and a Persian sword are displayed in the Gurudwara Damdama Sahib. The other sacred place at Talwandi Sabo are, Jand Sahib, Tibbi Sahib, Likhansar and Gurusar.

Besides, there are two Gurudwaras in memory of the ninth Guru Sri Tegh Bahadur, known as Wada Darbar Sahib and Gurusar.

Guru Gobind Singh had come to Talwandi Sabo at the request of Bhai Dala, a devoted follower. He was the Chief of Brar jats of Ma!wa area. He liked the place immensely and stayed here for over nine months. During his stay, the place was transformed into abode of the Khalsa and became a second Anandpur.

At Damdama Sahib as it is now called, the Guru preached complete sacrifice of personal and family interests at the altar of the good of mankind. The following. words of the great Guru expressing his firm faith in the Khalsa, are inscribed on a pillar installed by the Punjab Government,

"To the Khalsa does belong all,
My home, my body, and all I possess"

It has been declared as fifth Takht in April 1999 during tercentennial celebrations of the advent of Khalsa. 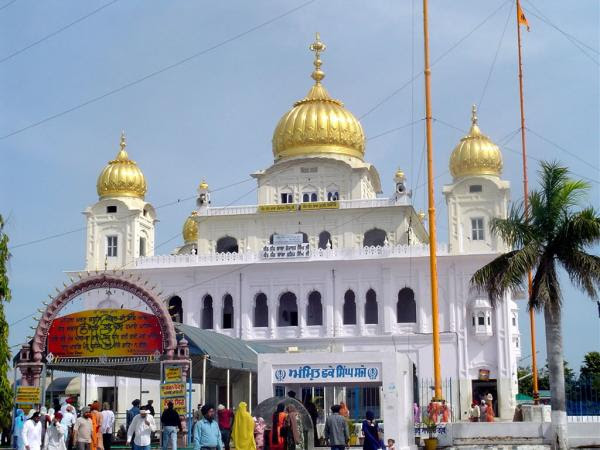 Gurudwara Fatehgarh Sahib is a complex consisting of several important shrines or Gurudwaras linked to the younger sahibzadas (younger sons) of Guru Gobind Singh. It is located about 5 km north of Sirhind, 40 Km from Chandigarh and marks the sad site of the execution in 1705 of the two younger sons of the tenth Sikh master at the behest of Wazir Khan of Kunjpura, the faujdar of Sirhind.

The place were the three were confined is known as `THANDA BURJ' which was considered a cool place during the summer. But it was a punishment for Guru's sons and his mother to kept here in extreme winter when the "burj" would be extreme cold. It was at this place that Mata Gujri collapsed on hearing the news of the martyrdom of her grandsons. Later on, Gurudwara Mata Gujri was constructed at this location to honour Mata ji.